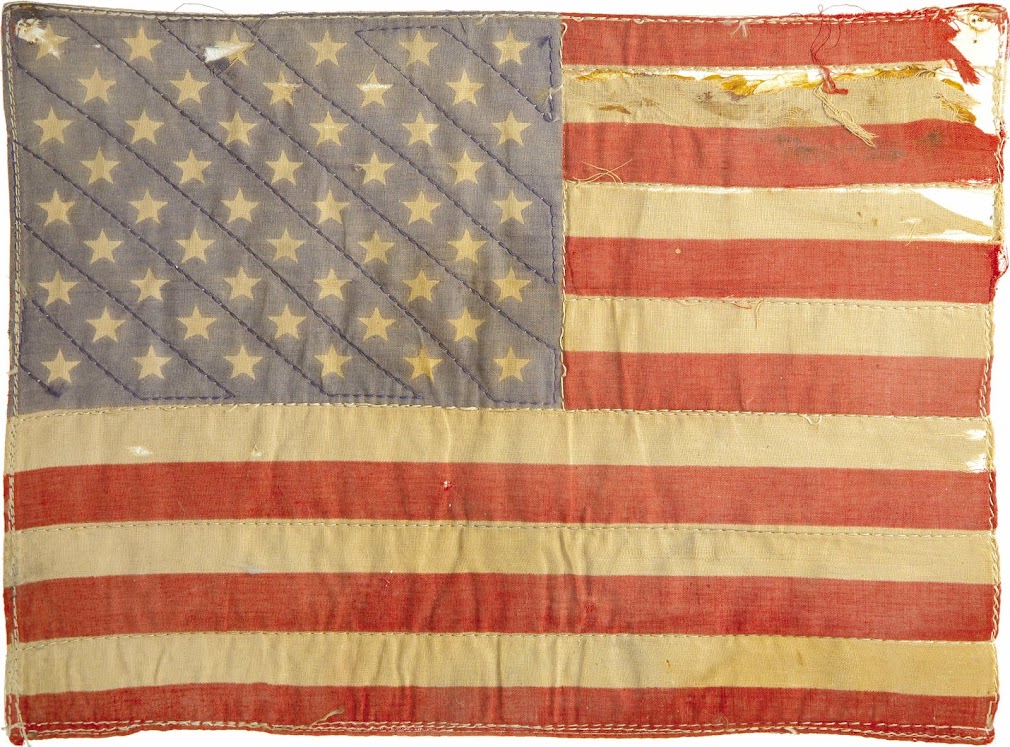 As you may know, we returned from the Searsport Hook-in, in Punta Gorda just two weeks ago.  I've been wanting to write about this since we got back but life gets in the way and I have not been able to find the time to properly write about it.
So, prior to leaving here for the hook-in, I saw on Searsports facebook page that they were raffling off two rugs, one hooked by Polly Minick and one by a woman named Barbara Brown.
Here is what Searsport wrote about Barbara's rug: *I have since learned that Diane Stoffel is the one who helped in adapting the pattern to a Halloween design*

"Originally this rug was a tapestry type design from Fraser rugs. Barbra Brown started the rug a few years ago after having it redesigned into a Halloween design by, I THINK Gail Dufrance. (I will check on that fact and fix it.) to say Barb loved Halloween was an understatement!! When barb died the rug was about 1/3 done. Polly Minick worked with us on getting it into as many hands as we could to complete it. Chris here at Searsport hooked about 1/2 of what was left to do. And bound it off. The money raised will go to an animal rescue group in Arcadia, Canine Cast Aways, where Barb lived and Semper Fi wounded warrior fund. This is a large rug, 50x70! "

What an amazing raffle and tribute to Barbara! From talking to the ladies we learned that Barbara was loved and I'm sure that finishing the rug was a great form of therapy for her friends in dealing with their grief.  As you can see above in Searsport's comments, the rug was adapted from a pattern as Barbara loved Halloween.  It really is quite an amazing piece of folk art and a true labor of love.
The hook-in was a 3 day event and the drawings were held at the very end of the last day.  Mom and I always buy tickets for the raffles, not so much hoping to win, but because we like to donate to the cause and the Canine Cast Aways and Semper Fi fund are both phenomenal organizations.  Mom bought a couple tickets and I bought quite a few.
When it came time for the drawing, Chris, the mother part of the Searsport team came over to Mom to have her draw the winning ticket.  Well, the thing is, Chris is quite tall and Mom is not, plus she has shoulder issues so I could see that when she reached her hand in the bag that was being held up that it was killing her shoulders.  So, Mom pulled a ticket and Chris handed the ticket to Julie and Julie says...."and the winner is...Carol......De..co....teau".  Yup, Mom drew her own name!  A moment of awkwardness ensued as, first her name is hard to pronounce, but at the beginning of Julie saying it, Mom knew, because that's how everyone pronounces or tries to pronounce it.  I believe my mother looked at me and said "shit".....yes, she has a bit of a potty mouth.  Julie and Chris looked at us, we looked at them, there was slight applause, then laughter.  Mom says her knees buckled when they called her name and you can see in the picture below that she just can't believe it! 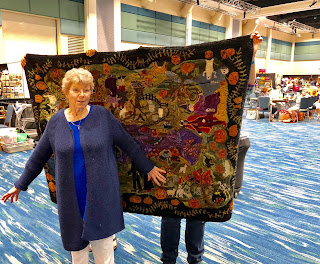 Just check out the amazing detail in this rug.  Every time we look at it we find something that we hadn't seen before. Halloween couples on each side, pumpkins, spooky cats, skeletons, witche's, fall leaves, poisonous apples, graveyards, a spooky night sky, so much to look at!! 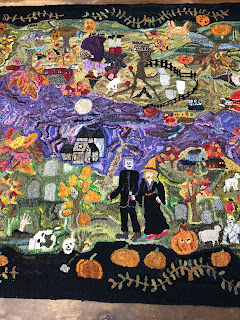 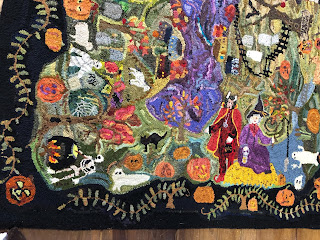 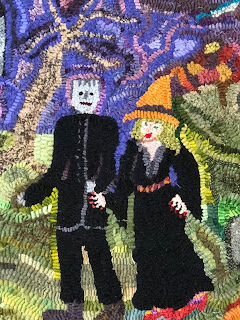 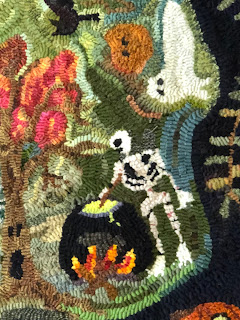 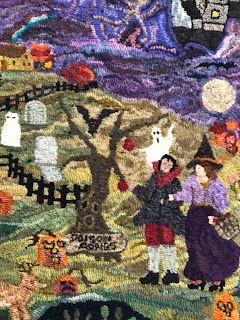 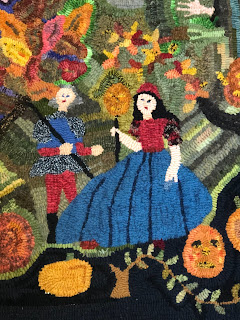 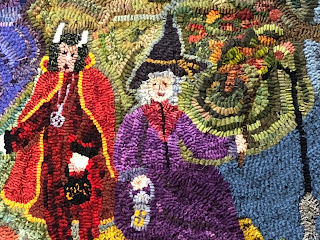 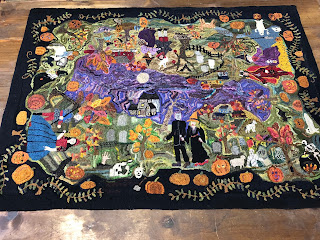 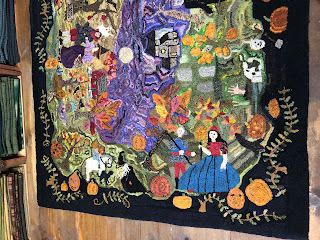 To the Searsport ladies and all the ladies who finished this beauty, Mom would like you to know how honored she is to own this rug.  The fact that it has such a beautiful back story makes it even more special.  This is a treasure and she is very grateful.  She has proudly shown several people the rug and told the story.  She wants you to know that this rug has a good home and will be appreciated for the labor of love that it was.

So glad it found a home it will be cherished in! Congrats!

wow great storu and so beautiful

After that initial awkward moment, ha ha, it was kismet that Carol won this treasure!

What an amazing treasure this it.... Congratulations to "mom!" I am a complete Halloween NUT, and sometime hooker....but I can't begin to imagine hooking a rug like this!!! Smiles & Hugs ~ Robin

My gosh that thing is beautiful! Well done girls!

So very happy it found its home with you as it will be cherished for the incredible works that it is! I fell in love with it on sight!

It really will be cherished!

It really is amazing!

Me too, we will cherish it!

It really is gorgeous!

WOW, it is amazing to say the very least. You mom is a lucky lady.

And I was there to witness!! I saw her in the corridor afterwards and I could tell that she was soooo excited. Perfect ending to a fabulous event. I’m glad that the Searsport gals raised funds for great causes and that Mama Carol will also benefit from giving this treasure a most loving home!

Congrats to mom. What an amazing rug!!!

I know Barb would be thrilled to have your mom win. She knew you both worked very hard in and for the rug hooking community. Congrats to mom.

Congrats to "Mom"! Mom's are the most precious people on earth and I'm sure she will continue to look in amazement to such a wonderful art piece! YEAH "Mom"!

That means a lot! Thank you so much!

Very great post. I simply stumbled upon your blog and wanted to say that I have really enjoyed browsing your weblog posts.

theoldtatteredflag
Thank you very much for taking the time to read my blog. I am married and just entering the second phase of my life as a Army retiree's wife. My husband and I did 25+ years in the Army. He is now officially a retired Colonel and has just entered the civilian workforce and I am happily settled in our 1830 Stone house. I (along with my Mom) operate www.theoldtatteredflag and currently we are building a small shop in the back part of the house. We live in Northern NY, right near the Canadian border. I have two handsome sons and 2 puggles. Life is busy for us, but I wouldn't have it any other way.